A Tip from the TIPS Market: Investors are Expecting More Inflation 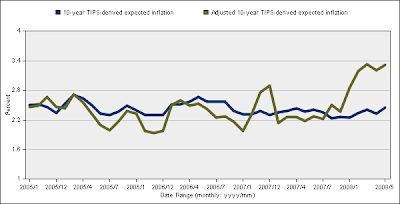 Inflationary expectations are growing. That comes across loud and clear from a number of surveys:

When the Conference Board surveyed households in May they found they expected an inflation rate of 7.7 percent for the year ahead (a record high survey result.) Lynn Franco, Director of its Consumer Research Center said "Consumers' inflation expectations, fueled by increasing prices at the pump, are now at an all-time high and are likely to rise further in the months ahead."


The University of Michigan reports that households expect inflation over the next five years to be near 3.4 percent, its highest reading since 1995.

The professional forecasters surveyed by the Federal Reserve Bank of Philadelphia (the old NBER/ASA survey) projects inflation over the next five quarters at 2.5 percent.

Another gauge is the difference between regular treasury bond yields and those on Treasury Inflation-Protected Securities (TIPS.) Currently the spread is 2.45 percent which would appear to indicate that investors expect a 2.45 percent inflation rate over the next ten years. But that may understate investors' true expectations. The Federal Reserve Bank of Cleveland adjusts the raw spreads for liquidity premia. Charles T. Carstrom and Timothy S. Fuerst explain how that is done in a briefing. With this adjustment the implied expected inflation rate is 3.32 percent.
Posted by Dr. Malcolm C. Harris, Sr. at 11:10 AM