Do You Care a Rap About the Business Cycle?

John Maynard Keynes was perhaps the most imposing economist of the Twentieth Century.  He is the father of macroeconomics (John Hicks might be called the midwife: indeed Hicks is probably the most influential, although his influence across the board in modern economic theory is so pervasive he is seldom cited.)

Friedrich von Hayek developed the ideas of Wicksell and the Austrian School theory of capital based on Boehm-Bawerk and von Mises into a coherent theory of the business cycle which does much to explain the mess we are in.

Keynesian economics justifies the use of stimulus programs such as are being used around the world to revive the world economy.  Nations around the world are following President Richard Nixon when he said, "We are all Keynesians now."

One should not assume Keynes would approve of current economic policy.  At a meeting of American economists shortly before he died, Keynes remarked "Perhaps I am the only non-Keynesian in the room." (as quoted in Bran Domitrovic's Econonoclasts: the History of the Supply-Side Revolution.)

Many thanks to both Ryan Pendleton and the Kansas Policy Institute who alerted me to this.
Posted by Dr. Malcolm C. Harris, Sr. at 1:12 PM 1 comment:

Are the Dogs of the Dow Back?

Credit card losses are down for major issuers. This bodes well for postal volumes and, as a lagging indicator, it is further confirmation that the economic recovery is well under way.  The U.S. Postal Service could use some good news with postal volumes and revenues falling at terrifying rates.

December Was Six Months Past the Bottom


My estimate is that the business cycle trough was last June.

Credit card solicitations have been a significant use of the mail over the years.  Losses reduce the ability and willingness of credit card issuers to solicit the more profitable lower credit customers , although it increases their need for higher quality customers: a plus for First-Class mail and thus USPS itself.  Higher losses mean greater capital is needed: a scarce and expensive requirement for the nations' banks. While they can borrow at virtually no cost, equity capital costs are punitive.  Think of Citi's recent dilutive offering.

Aparajita Saha-Bubna (with a little help from Joe Bel Bruno and Tess Stynes),  reported in Saturday's Wall Street Journal that delinquency rates fell off "for most credit-card issuers in December, but losses stemming from souring credit-card loans remain elevated."

American Express:  delinquencies  3.7% down from 4.1% in November

Chase is a unit of J.P. Morgan Chase Co

According to the same article, JPMorgan's "Chief Financial Officer Mike Cavanagh said the recent improvement in credit-card losses mightn't continue as the U.S. economy continues to claw its way out of the financial crisis.

"Mr. Cavanagh, speaking to the media after the bank reported fourth-quarter earnings, expects a $1 billion loss for credit cards in the first and second quarters."
Posted by Dr. Malcolm C. Harris, Sr. at 5:05 PM No comments:

Dr. Hoenig, the Hawk: We Need More of Them

Dr. Thomas Hoenig, President of the Kansas City Federal Reserve Bank, has been known as a monetary policy hawk in the past. If he has been part of the Federal Open Market Committee's consensus supporting negative real interest rates, he is a dove no longer. He told the American Economics Association (AEA) meetings, “Experience both in the US and internationally tells us that maintaining large amounts of stimulus over an extended period risks creating conditions that lead to financial excess, economic volatility and even higher unemployment at some point in the future.” Amen!

As George Santayana taught us, "Those who cannot learn from history are doomed to repeat it." So at issue is what role monetary policy played in creating the real estate bubble that caused the so called Great Recession of 2007-9. To Hoenig and to me it is clear that the over-expansion of credit that inflated the bubble had as its root cause the Fed's war against the paper dragon of deflation. Negative real interest rates in 2002-2005 and much too low rates in 2006 subsidized the creation of ever more esoteric securities which was the stuff from which Wall Street's leverage binge was made.  Negative real interest rates inflate investment bankers' profits and bonuses, misdirect productive resources into speculation, cause a dangerous correlation of returns, and subsidize the ever increasing financial roundabout production we saw during the recent bubble. Short term interest rates are the price for the raw materials with which investment banks create leverage in securities markets and financial engineers manufacture designer securities.Subsidize the raw materials and increase the supply.

Bernanke is a better student of the Great Depression of the 1930s than of the recent bubble. As John Cassidy relates, that Ben Bernanke "[r]ather than conceding that he and his predecessor, Alan Greenspan, made a hash of things between 2002 and 2006, keeping interest rates too low for too long, he said the Fed’s policies were reasonable and the main cause of the rise in house prices was not cheap money but lax supervision." Cassidy is moved to wonder in the Financial Times whether Ben Bernanke is "Decended From the Bourbons?" recalling "Talleyrand’s quip about the restored Bourbon monarchs: 'They have learned nothing and forgotten nothing.'”
Posted by Dr. Malcolm C. Harris, Sr. at 5:49 AM 1 comment:

Requiem for the Dollar 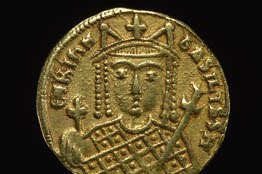 Constantine the Great created the solidus, a gold coin that held its value well enough to be a monetary standard for seven hundred years.  The Bretton Woods monetary system survived a quarter century.  The U.S. dollar is worth maybe 5% of its 1900 value.

Jim Grant, the sage of the bond market, writes in the Wall Street Journal a lengthy, witty, thoughtful, and ultimately depressing "Requiem for the Dollar. "  He tells us, "To give modernity its due, the dollar has cut a swath in the world. There's no greater success story in the long history of money than the common greenback. Of no intrinsic value, collateralized by nothing, it passes from hand to trusting hand the world over. More than half of the $923 billion's worth of currency in circulation is in the possession of foreigners."

Yet like all great schemes it has its limits.  "But now the world is losing faith, as well it might. It's not that the dollar is overvalued—economists at Deutsche Bank estimate it's 20% too cheap against the euro. The problem lies with its management. The greenback is a glorious old brand that's looking more and more like General Motors."  Ouch!  Take away my membership in the American Economics Association before you compare me to Rick Wagnoner!

The strength of the dollar is of both economic and geopolitical significance.

Stable monetary values make economic calculation easier and facilitates prosperity.  Unstable money gives incentives to speculate and invest capital and human energy into unproductive activities.  Diverting human and financial capital form productive activity makes society poorer.  It is one of the two legs of Robert Mundell's "policy mix," which not only won him a Nobel Prize, but also is the foundation of Supply-Side Economics as Brian Domitrovic demonstrates in his new book, The Econoclasts: The Rebels Who Sparked the Supply-Side Revolution and Restored American Prosperity."

Our current international financial system has no anchor in the real economy.  We have floating exchange rates that float whithersoever the whims of speculators send them.  Wallace and Sargent demonstrated three decades ago that floating exchange rates have no equilibrium.  The result is uncertainty in trade, profits for banks, and the diversion of many clever folk into speculation.

President Obama's new realism (see "Is there an Obama Doctrine?" in the Economist) seems to say that we as a superpower will assert our selfs, if we can afford it.  With such an anemic dollar it is hard to say we will afford much!
Posted by Dr. Malcolm C. Harris, Sr. at 1:22 PM 1 comment: