The Economy Needs Shock Treatment
The chairman of the Federal Reserve has finally noticed that the dollar is making Latin American currencies look strong. His speech to the International Monetary Conference, in Barcelona, Spain was widely interpreted as “jawboneing” the dollar up. What is really needed is shock treatment: a large and unexpected hike in the federal funds rate. Bernanke’s attempt to fight the recession and the credit crunch by flooding the world with liquidity is instead drowning the economy in a flood of inflation and sinking the financial institutions he hoped to save.

What caused the Fed’s Chairman to finally notice the dollar?

Firstly, inflationary expectations are red hot. The market for indexed treasury bonds indicates investors are expecting inflation of 3.4 percent over the next ten years. That is based on data from the Cleveland Fed. Investors are voting with their dollars that the Fed is way off its 1-2 percent inflation target. Households are telling pollsters a similar story. Last month, when the University of Michigan asked consumers what they expected inflation to be over the next twelve months, they answered 5.8 percent. That is the highest reading in twenty-six years. What they told the Conference Board was an even scarier 7.7 percent (a record high survey result.) Lynn Franco, Director of its Consumer Research Center said "Consumers' inflation expectations, fueled by increasing prices at the pump, are now at an all-time high and are likely to rise further in the months ahead." The last time households were this pessimistic about prices, they were the walking wounded still skeptical about Paul Volcker’s epic war against inflation. 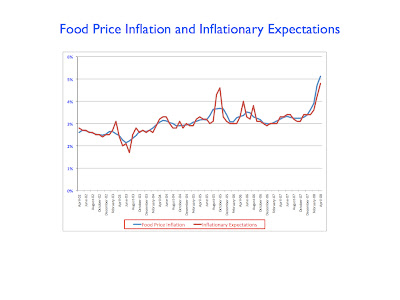 Secondly, import inflation is sucking purchasing power out of the economy so fast that it is aborting any potential recovery. Import prices rose 17% over the last year. America imports $2 trillion worth of goods and services. Do the math: that is a loss of purchasing power of about $340 billion. That is more than twice the size of the fiscal stimulus package.

Thirdly, inflation on domestically supplied goods is taking away another $200 plus billion of purchasing power. As inflation gets more and more entrenched, the economy will become progressively more immune to fiscal and monetary stimulus.

Fourthly, the monetary mavens at the Fed have started to realize their big mistake. By focusing on the so-called “core inflation rate,” they took their collective eye off the ball. The Fed has targeted “core inflation” at the expense of “headline inflation.” What the Fed calls “headline inflation” measures the rise in the prices of what we actually buy. Little wonder that makes the headlines. We measure “core inflation” by pretending we do not eat, do not feed the kids, do not heat and cool the house and do not drive the car: we subtract food and energy prices from the price index. The theory is that “If core inflation is OK, we are OK.” The Fed thinks we are OK. A trip to the supermarket would have cured that delusion. While oil prices have had the lion’s share of the headlines, food price inflation has really hit American households hard. It is those trips to the supermarket that have the American consumer hopping mad. Food prices are rising at two and a half times the “core inflation” rate. Consumer inflationary expectations are tracking food price inflation much more than they did in the past. Worse, given the rapid rise in inflationary expectations, this is going to start bleeding into wages and the prices of other goods and services. If you look carefully at the Great Inflation of the 1970s, that nightmare we all want to avoid reliving, food prices consistently led both “headline inflation” and “core inflation.”

A sober economic historian would judge the years 1973 to 1982 as the worst decade in the last sixty years. The misery got started when another Fed Chairman, Arthur Burns, pumped up the supply of money and credit to achieve domestic objectives (reelecting the president.) The money supply grew 13.4% and liquidity assets in double digits in 1971. With the dollar as world’s reserve currency, exported his inflation to the rest of the world. The main economies started expanding in unison setting off a global commodity price boom. Oil prices, then as now, only took off after the bandwagon already had a powerful momentum going. In short order, the dollar was devalued and the international monetary system thrown into chaos. New York started losing ground as the world’s financial center to London and others. The economy went into a severe recession as inflation sucked purchasing power out of it and inflation disrupted economic decision-making. After a decade of accelerating inflation and three recessions, economic sanity was restored with much pain and suffering. Vast amounts of wealth were redistributed and unemployment averaged seven percent.

I am experiencing a terrible feeling of déjà vu. In the U.S., an overexpansion of credit caused a house price bubble, particularly for high-end houses. This was fed by and help to feed the creation of ever more complex financial instruments whose connection to the underlying fundamentals was evermore distant. As with all speculative excesses, this one too had to come to an end. As these distortions started to correct themselves, the housing market turned down. The esoteric instruments born in the boom had been sold globally. Investors around the world started to realize that they had bought a pig in a poke and the pig was now starting to stink. The resulting stampede to sell these securities led to a credit crunch. The Bernanke Fed’s initial attempt to deal with the crisis was to flood the world with liquidity and slashing the federal funds rate. The result was uncomfortably like being in a house where someone in the living room is cold. This thin-blooded soul jacks up the thermostat so that everyone else is sweating. A wiser solution would have been to put on a sweater or get a space heater.
Posted by Dr. Malcolm C. Harris, Sr. at 8:33 AM