What Has Paris Got to Do with What My Lady Buys at Kohl's or Penny's? 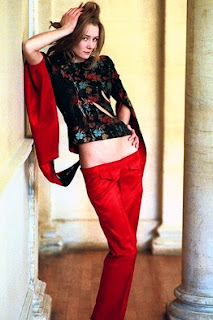 While some of us ask whether the oddly proportioned ladies on the fashion runways were genetically engineered, a reader of the Wall Street Journal asks Teri Agins, the Journal's fashion editor, about "How Fashions Trickle Down From Runways to Stores."

Agins tells us, "Runway creations provide many ideas that trickle down to the masses. Alexander McQueen's low-riding 'bumster' pants [see picture by Rex] seemed downright radical in the mid-1990s. But the revolutionary silhouette inspired many interpretations—and gradually morphed into the low-rise jeans that are so ubiquitous in shops today. Of course, not every design has a runway origin; Capris date back to the 1950s but were revived as recently as a decade ago.


"The mainstream market offers a mix of original designs and runway interpretations."

Penny's, J. Crew, and the rest keenly follow the traveling fashion show as it goes from Milan to Paris to New York. They then design for their own customers. Agins writes that stores "have design teams who possess a keen sense of their consumer fans and give them what they want." Consequently, "what's offered in stores doesn't really change very much. Most customers gravitate to familiar styles that work on many body types, tweaked just enough to look new."

One of the cleverest firms is Zara which has honed the art of imitation and design. Its competitive advantage lies in the speed with which it can put trendy designs on the racks and turn over their fashions. Zara is headquartered in Coruña, Spain. It has ridden its design cycle and supply chain management to spectacular growth and profitability for its parent,Inditex.

Inditex earned €1.3bn on sales of €11.1bn over its fiscal year ending January, 2010, up from the prior year's €1.25bn. Retailers typically have fiscal year ends ending in January. This permits a general inventory after Christmas and January "white sales."  Mark Mulligan explained in the Financial Times that "sales rose 7 per cent," not bad in a global recession which hit particularly hard in Europe. Mulligan attributed it to "expansion in Asia [which] helped offset weakness in the domestic market and other faltering European economies. After stripping out currency factors, global revenues rose 9 per cent, the company said."
Posted by Dr. Malcolm C. Harris, Sr. at 9:00 AM

Email ThisBlogThis!Share to TwitterShare to FacebookShare to Pinterest
Labels: Fashion