The Labor Party Isn't Talking to Itself

Australia's Government Labor (not "Labour") government was thrown into crisis by Kevin Rudd's surprise resignation while on a trip to the U.S. The WSJ's Deborah Kan speaks to reporter Enda Curran (2/22/2012):

Four days later, Julia Gillard won a vote by the Labor parliamentary caucus to stay as Prime Minister. She won the war. Will she win the peace?

Email ThisBlogThis!Share to TwitterShare to FacebookShare to Pinterest
Labels: Australia 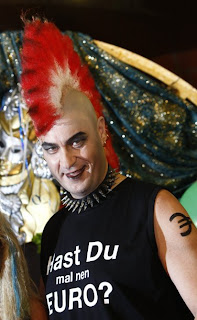 Michäla Rehl took this picture of Bavaria's  Finance Minister Markus Söder for Reuters February 10, 2012.  Herr Söder was in Veitshöchheim (near Würzburg) for the TV show "Fastnacht in Franken."  Fastnacht is one of the common names for Shrove Tuesday ("Fat Tuesday.")  Fat Tuesday is fat because we fill up before Lent begins on Ash Wednesday.  It is called Fasching in Bavaria, carnival in much of the world, and marti gras (French for "Fat Tuesday") in places like New Orleans.  Carnaval accounts for 70% of Brazil's tourism and 80% of its beer consumption: not bad for a week's "work." This celebration of the fun before the fast can create enough sin to require at least forty days of repentance.

The "Hast Du mal nen Euro?" translates roughly into "Would you have a Euro already?" or "Spare a Euro?"  I wonder whether this is Bayerisch or Kiezdeutsch.   The Economist describes Kiezdeutsch as "the argot of inner-city teenagers" and a Doktor Heike Wiese, linguist at the University of Potsdam, has argued it to be a distinct German dialect.  Purists are outraged.

Might Herr Söder be making fun of the Greeks asking for a handout? Why such Teutonic skepticism?  Those suspicious Germans figure the Greeks want Fasching without fasting, i.e., carnival without Lent.  Well who wouldn't?  The Germans read their Homer and know what happened to the Trojans when they believed the Greeks.

Bank of America to Fannie Mae: If That's the Way You Want to Do Business, We Won't Do Business with You!

Over a the two decades before the Housing bubble burst, Countrywide Financial became Fannie Mae's biggest supplier of mortgages to securitize. Gretchen Mortgenson and Joshua Rosner document the symbiotic relationship between Angelo Mozilla's Countrywide and Fannie in Reckless Endangerment.  Their relationship was both financial and political as they built up the financial industrial complex that drove the financial system to ruin.  Although Mortgenson and Joshua Rosner demonstrate how these two firms worked with the politicians' and the government's aiding and abetting to degrade credit quality, Fannie is now owned by the federal government.  Under this new management, Fannie wants to only buy mortgages from Bank of America (Countrywide was rescued by Bank of America) on the condition that it can sell it back to the bank if they do not conform to its underwriting standards ex post facto.

You May Make the Rules, But I Do Not Have to Play the Game

Bank of America has said "No deal!"  It thought it was helping out when it rescued Countrywide only to be hit with one law suit after another from the government.  Bank of America has learned how the government treats those who give the country a helping hand: it bites it until it bleeds.  Exposing oneself to unknown and unlimited liability is not the path to success in banking.

Christina Passariello in the Wall Street Journal last Friday reported that, "At a time when many consumer goods segments are suffering, luxury is rich with promise. The world's biggest luxury-goods purveyors are coming off a blockbuster" year.  Among those reporting quarterly results, sales were up 20% at LVMH (Moët Hennessy Louis Vuitton SA); 22% in PPR SA's luxury division (includes Gucci), and 18% at Hermès.

What does the Jobs Report Mean: James Sherk of the Heritage Foundation

Can the Richest Aussie Sheila Make Even Fairfax Quake?


The WSJ's Deborah Kan talks to Andrew Critchlow, the Journal's Australian correspondent, about Australia's richest woman, Australian mining heiress Gina Rinehart.  This savvy investor is translating her natural resources wealth into the biggest shareholding in Fairfax Media. (2/1/2012.)  Will she who pays the piper call the tune?