In October, 2010, Ed clarks talks About His Success in Building a Great American Banking Franchise

Why does going after deposits and loans; giving great customer service; and expanding where the opportunity arises sound like this bank is marching to a different drummer?

Toronto Dominion had about 1,000 branches in the U.S. early in the financial crisis and now has 13,000. Dull grey flannel banking earns Ed Clark the Canada’s Outstanding CEO of the Year award!

Email ThisBlogThis!Share to TwitterShare to FacebookShare to Pinterest
Labels: Banking

Email ThisBlogThis!Share to TwitterShare to FacebookShare to Pinterest
Labels: Banking

Twenty Years of a Convertible Ruble.

For approximately 500 years the Russia has used the ruble as its currency. Since the Soviet Union's fall in 1991, the country has undergone some drastic changes, including the ruble. After the fall the Russians focused on the challenge of converting their centrally planned economy to that of a market based economy with an emphasis with global integration. In 1991, the USA and the IMF recommended the economy undergo a radical “shock therapy” approach to market oriented reform. Rather than kick starting the Russian economy it led to collapse. Millions fell into poverty and corruption and crime grew rampant.
Hyperinflation resulted from the removal of the Soviet price controls. There were monumental difficulties in actually implementing the fiscal reforms. The govenment depended heavily on short-term borrowing to finance its budget deficits from 1991 until the 1998 financial crisis. These financial problems were exacerbated by low prices for Russia’s major exports a lack of investor confidence. The led to a falling ruble, a weakened banking system, and the constant threat of runaway inflation.
Despite these ongoing economic difficulties Russia and its ruble continued to struggle forward, claiming small victories along the way. In 2000, Russia successfully upheld its external debt obligations in addition to making a large advance payment of principal to loans from the IMF and building up its own Central Bank reserves. In 2002 the Russian government successfully assumed its payment of roughly $14 billion in official debt payments coming due. It was able to accomplish these feats through a sound government budget, improving trade, and substantial current account surpluses.
The current account surpluses caused the ruble to appreciate rapidly in value. However given its role in Russia’s exports, the country and the economy depend heavily on the price of energy. The 2001 U.S. recession and the global slowdown after the high tech burst caused energy prices to fall. In 2002 the G8 nations cancelled $20 Billion of the old Soviet Union’s debt. They hoped this would induce Russia to use these savings to safeguard Russia's nuclear and other dangerous materials from terrorists.
In 2004 the Stabilization fund of the Russian Federation was established and integrated into the federal budget as a safety net against falling oil prices. This was aimed at keeping the ruble stable through turbulent times in the energy sector.
The battle for economic stability lasted for more than half a decade. However, in 2007, Russia achieved one of its goals when the IMF certified the Russian economy had achieved macroeconomic stability.
In 2009 Russia’s GDP grew at its fastest since the fall of the Soviet Union. This meant that Russia and its ruble had officially overcome the consequences of the 1990 recession and economic collapse. Throughout all of this the ruble has been under the strains of inflation, although unemployment was cut nearly in half from 2000 to 2007.
In 2011 the upheaval in the Middle East has provided Russia with higher prices and increased demand for its energy exports as it helps to fill the gap left from reduced production in the Middle East. This will hopefully bring welcomed news for the Russian economy and its ruble.
The ruble has improved much more than Russian politicians and laws so that investors having greater faith in the currency than the integrity of its government.
-Stephanie Giberson
Posted by Dr. Malcolm C. Harris, Sr. at 7:24 PM No comments:

Steve Jobs has spent his career challenging conventions about personal computing. He's transformed an industry and changed the way we think about technology. A look back at the accomplishments of an American business icon.

Steve Jobs is "one of the two or three leading historical figures of the tech revolution," says WSJ personal technology columnist Walt Mossberg.

Is that a Tear Rolling Down Alexander Hamilton's Cheek? 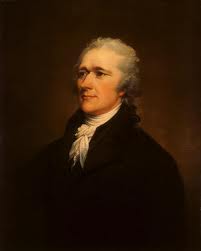 Alexander Hamilton was a pesky immigrant who saw Great Britain's creditworthiness and thus ability to borrow as important to its standing as a superpower as was the British navy.  As the republic's first Secretary of the Treasury, he set the U.S. on course to creating the dollar as the world currency built on the credit worthiness of U.S. treasury bonds.

Pity Mr. Geithner who fate it is to have Hamilton's job when we suffer the indignity of a credit downgrade.  Standard and Poor's announced after markets closed Friday that America's bonds have fallen from AAA to AA.

Guess who said the following?

"The U.S. government has to come to terms with the painful fact that the good old days when it could just borrow its way out of messes of its own making are finally gone...
A little self-discipline would not be too uncomfortable for the United States, the world's largest economy and issuer of international reserve currency, to bear.

"For centuries, it was the exuberant energy and innovation that has sustained America's role in the world and maintained investors' confidence in dollar assets. But now, mounting debts and ridiculous political wrestling in Washington have damaged America's image abroad...
All Americans, both beltway politicians and those on Main Street, have to do some serious soul-searching to bring their country back from a potential financial abyss."

The correct answer is (D).  Saturday, in the wake of the downgrade,  Xinhua, China's official news service editorialized the words you just read.  The signed editorial was attributed to Yamei Wang.  It is embarrassing to be lectured by China especially when China is calling a spade a spade.