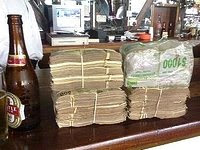 Robert Mugabe has long been an embarrassment to Africa. He has built a totalitarian regime on the crudest thuggery. Now he is committing economic crimes against humanity. Zimbabwe's hyperinflation is, to the extent it is measurable, running at a million percent, according to David Gaffin on Marketbeat. The picture on the right shows how many bank notes are needed to buy one bottle of beer. But that was a few days ago, prices change minute to minute.

Supplying paper to print the currency has been a lucrative business for a Bavarian company, Giesecke & Devrient. The Wall Street Journal describes it as "a secretive, family-owned Bavarian company that once made its money churning out worthless cash for the doomed Weimar Republic in the 1920s." Giesecke & Devrient "has been airlifting tons of blank notes to the Zimbabwean capital Harare. The company, which has been doing business with the African nation since before Mr. Mugabe took power in 1980, is one of the few sources in the world for the specialized paper that is so important in an age when computers and laser printers have made forgery easy."

What is Zimbabwe's fiscal policy? It is the same as its monetary policy: have paper will print! However that may end. Under pressure from the German government, Giesecke & Devrienthas stopped supplying Mugabe. Will the Chinese now supply his printing presses?
Posted by Dr. Malcolm C. Harris, Sr. at 8:03 AM

WOW what an article. It is hard to believe that this could happen in any country. When it costs this much for a beer makes one wonder how much for like houses and other resources. However after World War I in German hyper-inflation kicked in and made it almost impossible for the average Joe to eat a decent meal home cooked. Hyper-Inflation is a deadly thing to an ecnomy.