Will This Movie on Fracing Light Your Fire? 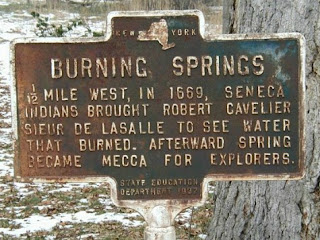 Ann McElhinney and Phelim McAleer have directed a new documentary about hydraulic fracturing that gives a very different picture from that portrayed in the Acadamy Award nominated documentary, "Gasland."  McElhinney is a bit of a fiery journalist, perhaps because of the attempt to muzzle the Irish pair (see below.)  Telling an Irishman or Irishwoman to shut up is hazardous.  Here are some things she has to say about what they found in researching "FrackNation: A Journalist's Search for the Fracking Truth:"


She is certainly right that the first hydraulic fracturing was done here in Kansas in 1947.  It was in the Hugoton field in southwest Kansas.  I doubt that that conventional well was in a shale formation since the field is "mostly Permian limestone and dolomite."

Video journalist Phelim McAleer questioned Josh Fox, the producer of the anti-hydraulic fracturing documentary "Gasland," about why he failed to disclose that methane has been present in Colorado water for decades and thus flammable at the tap:

In the New York Post, McAleer wrote last spring, "One of the most dramatic images in 'Gasland' is footage of a resident lighting his tap water with flames shooting out of the faucet.

"As a journalist, I wanted to learn more, so I went to a Q&A with Gasland director Josh Fox. As I questioned him, Fox eventually admitted that he knew people could light their tap water in these areas decades before fracking came on the scene.

"But he did not include the fact in his documentary because, he said, 'It was not relevant.'"

He then went on to tell of Fox's attempts to get the above video removed from YouTube and other internet sites.

Unlike "Gasland" and "Promised Land," Matt Damon's anti-fracing movie FrackNation is not financed by big Hollywood money.   It took a much more democratic route to finance itself.  Christopher Toto tells us "FrackNation, like many independent films of late, went the Kickstarter route to help bring its story to the masses."

According to the director's statement, "'FrackNation' was funded through the crowdsourcing website Kickstarter. The filmmakers raised $212,265 from 3,305 backers on Kickstarter on April 6, 2012. It was one of the most successful documentary campaigns in the history of Kickstarter."

John R. Hays, Jr., an eminent Texas attorney with an extensive practice in the oil and gas industry, tells me that the proper way to shorten "hydraulic fracturing" is "fracing" not "fracking," given industry practice.  I am afraid the industry is losing the spelling war: it is not the geologists and the petroleum engineers who are winning.
Posted by Dr. Malcolm C. Harris, Sr. at 8:13 PM